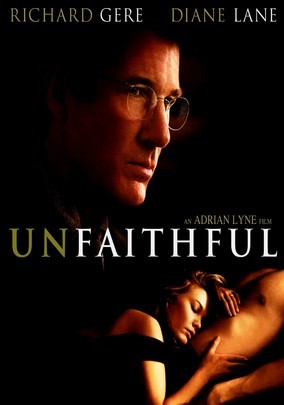 BLURB: “Connie, a forty-something wife and mother, escapes the content but boring life she has with her devoted husband, Edward, when she starts up an unexpected, all-consuming affair with Paul.”

BOTTOM LINE: The happiest of marriages can be tempted.  Going to the dark side isn’t always about looking for fulfillment in another person, sometimes it’s about doing something that makes you feel like a terrible person, just so you can feel alive.
This film will take you on a few different romps: definitely some sexy ones (sex in the cafe bathroom while you keep your friends waiting, anyone?) and definitely some emotional ones.  There’s also just a flat-out great script, an award-worthy performance by Lane (she was nominated for both a Golden Globe as well as an Oscar here …) and all the steamy heavy-breathing you could want.  Also?  “Best Use of Snowglobe” since Citizen Kane.  If you saw this the first time when you were single, and now you’ve been married about a handful of years, it might deserve a second look.  It plays a lot differently.