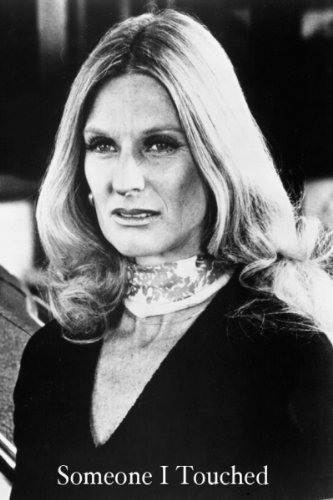 BLURB:  A woman learns that her husband has been unfaithful and that he has acquired a venereal disease. Then she learns that, after years of trying, she is finally pregnant.

BOTTOM LINE: Someone I Touched is the most hilarious title for a TV movie about STDs – but it gets better: Cloris Leachman is in her glory days – not some grandma tv trope but some sexually liberated hottie who’s suddenly got a case of the clap.  Oh hell no!   What’s gonna happen when her husband finds out?

While there’s no doubt that this made-for-TV movie is seriously dated, there’s also some good messages in there, and a bit of a twist to the story.  Plus, like any good 70s TV movie you get an eyeful of retro backdrop that’s sugar sweet for anyone who misses the Columbo days.  An added bonus is that The Lady Cloris herself croons the title song over the sunny California kids playing their carefree days away.  You ain’t been living till you’ve heard this swoony ballad with its double entendre that pays homage to easily transmittable sex diseases while still hitting you right in your romantic feels.

It’s an after school special for adults with a lot of hit-you-over-the-head dialogue, but the melodramatic, overly scored, dramatically acted scenes will make it one of your new favorite guilty pleasures.  If you don’t have time to watch the whole thing, take less than 10 minutes out of your bizzy schedule and watch the YouTube video I’ve attached here for your convenience.